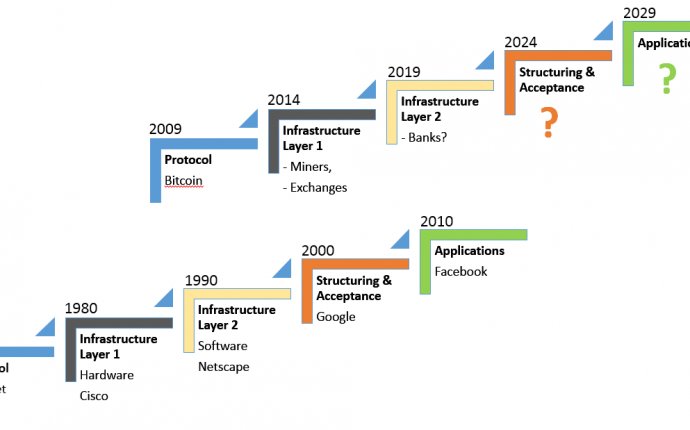 We owe many of the innovations that we use every day - from our favorite longstanding websites to the latest mobile applications - to the existence of underlying highly technical protocols. Endusers don't need to understand these any more than drivers need to understand the workings of a car engine. Policy makers, however, need to understand the importance of protocols for enabling distributed permission-less innovation - that is, innovation by many individuals and startups. For instance, the hypertext transport protocol (http) is what lets a browser talk to a web server - as long as the server implements the protocol it can deliver innovative content or services to any browser. HTTP itself builds on many other lower level protocols, such as DNS and TCP/IP. Historically, protocols have emerged from either research projects or from individuals / small groups simply throwing something out that sticks. In the debate about bitcoin it is critical to understand that bitcoin has the potential to be such a protocol that enables a lot of new innovation to take place.

At the heart of bitcoin is a fundamental innovation: a distributed public ledger. A ledger in accounting is a book that you cannot edit once you have written in it. Instead, if you have made a mistake, the only way to fix it is to add another transaction to the ledger that undoes the error. As we know from accounting fraud, problems arise when people figure out ways to transact without recording it in the ledger or making ex post changes to the ledger (this is why Quickbooks isn't really an accounting system). The bitcoin ledger is the so-called blockchain which uses the fact that there are many copies of it that are broadly distributed combined with a fair bit of math to ensure that once a transaction has been recorded in the blockchain that transaction can not be changed after the fact. There is no other widely used protocol in the world today that accomplishes this: with bitcoin anyone can make a statement (a transaction) and have this be recorded in a globally visible and fixed ledger.

Why is this a big deal? Because as it turns out the transactions that can be recorded in the bitcoin ledger have a lot of expressive power built into them in the form of a scripting language. This allows for certain types of contracts to be built on top of bitcoin, such as deposits, escrows, all the way to distributed stock trading. For instance, there is a proposal for something called "colored coins" which allows additional data to be attached to a bitcoin that can then stay connected through all subsequent transactions. That data could represent, for example, shares in a company at which point the block chain becomes a fully distributed and public ledger of stock ownership (potentially replacing either physical certificates as still used by most startups or separate custody services). Because of the scripting language, the ledger is actually intelligent and once shares are represented that way it becomes possible to construct automated versions of derivatives contracts.

These are just some examples of the innovations in financial services that bitcoin as a protocol can enable. Beyond that there is the potential to use the bitcoin protocol to solve other problems in a globally distributed fashion, such as how to assign and manage unique names (see also the Namecoin project). As various agencies consider regulations for bitcoin it will be important to balance the protection of consumers and enforcement against (organized) crime with maintaining the potential of the bitcoin protocol to be a fundamental enabler of innovation.

RT @PolyCoins: #Stratis-the new Bitcoin: rewritten in C# for .Net + Proof of Stake + Tumblebit and other advancements and millions of pote…