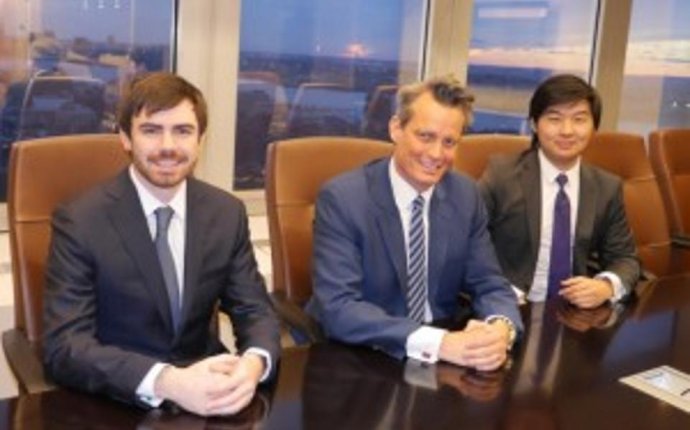 Alex Waters is a developer in New York who has been working on Bitcoin for five years. He’s currently the CEO of Coin.co, a company that gives entrepreneurs the ability to reach global markets through the use of Bitcoin.

In this interview we talk to Alex about Bitcoin basics and then dive into how Bitcoin is set to change the banking industry.

What is Bitcoin and why is it important?

Primarily, it’s a significant event in computer science. For a long time, computer scientists and cryptographers have reached for a digital currency or a “digital gold.” It’s been written about in science fiction, and there’s been a large body of work on how to create it.

In 2009 Satoshi Nakamoto, the anonymous creator of Bitcoin, published a white paper about his research, pulling together existing concepts that could facilitate an online currency in a fair way.

The currency is profound in the way it behaves as a decentralized public ledger, which allows people to provably and fairly track assets around the globe. Nobody can manipulate the transactional ledger without everybody else realizing it, which means it’s a fair way for people to exchange things. Additionally, the rules are all consensus based, so the system is held accountable by all of the users. This feature ensures the integrity of the system and allows it to be improved upon if the improvements are in the interest of the general public. We’ve seen a number of those improvements so far, and developers continue to fasten on interesting new features to Bitcoin every couple of weeks. It’s a living code base.

By use of the public ledger people can exchange units, or credits, called Bitcoins. They’re representative of value because the ruleset dictates that they’re scarce, and there’s a fixed supply of them. This allows for international remittance — a global currency, where somebody in Australia can convert their local currency into Bitcoin, send it to their relatives in London (or in the U.S., or in China, or wherever), and then that relative can convert it back into the local fiat currency. The conversion rates are much lower than what we have traditionally seen, and there’s no counter party — no intermediary that can restrict the flow of funds or impose unreasonable costs to moving those funds. That’s remarkable from a remittance standpoint, and that’s one of the more disruptive features of the currency at this time.

Another facet that’s interesting about Bitcoin is how all transactions that occur in the network are logged in this thing called the blockchain, which is effectively a control system that allows us to see a history of all the transactions in real time. We can see them moving across the world, which is useful for auditing. But it can also be used to track the history of a certain token or a certain asset. For example, if we were to tokenize cotton, we could see how certain units of cotton could move through a local supply chain into a final product. That’s advantageous for many reasons to many different interest groups; it’s something that’s long been sought after.

So there are all these interesting facets of Bitcoin that have huge implications, but primarily it’s used as a global currency.

Why do you think banks like BBVA and USAA have started investing in Bitcoin?

Various banking institutions are placing their bets and starting to take Bitcoin seriously. They want to have a stake in its growth. The blockchain, ledger technology, and digital currencies are going to be a big part of these institutional banks. Investing in some of these early Bitcoin companies gives them insight into how the industry is developing as well as access to the technology being developed. I’m sure they’re going to integrate that technology into their current infrastructure.

How can banks integrate Bitcoin?

Banks could use the blockchain or a public or even semi-public ledger to enhance the current range of interbank settlement networks such as Swift or ACH. By implementing the blockchain banks would reduce costs and compliance risks. Also, there’s much less likelihood of human error because it’s a rule-based, protocolized technology.

There are also some new ways banks could use Bitcoin. They could tokenize a loan and then freely sell that loan on the market in a traceable way. Or say they want to provide products and services to markets that currently aren’t present. For example, say a local bank in New York wants to provide services to a community in southeast Asia. That would probably be difficult to do today, but with a digital currency the bank could potentially reach that new market without having to change that local community’s fiat currency into the bank’s local currency.

Additionally, there’s security. Bitcoin is at the cutting edge of cryptographic technology. By integrating with these new concepts, banks would be incorporating advanced security features like public-key encryption and private-key message signing. So it would improve consumer protections.

Would you advise banks to invest in it?

I would — especially large banks. Across the board, many of them have Bitcoin working groups, and they’re very active in investigating the potential of the technology. What I would say to banks is to take it very, very seriously. We saw what happened to the recording industry and the publishing industry, and that disruption can’t be far from the banking industry. The wise thing would be for banks to incorporate some of these new technologies into their business model. I think that’s why we have successes like iTunes, Pandora, The New York Times, and Bloomberg — because they embraced new technology rather than fighting it.

I hope that smart banks will take the same approach rather than putting their head in the sand. What I’m seeing currently is that there’s a lot of innovation and interest coming out of Europe — specifically London — but not as much here stateside. I hope that banks here will take it more seriously and allocate more funding for it.