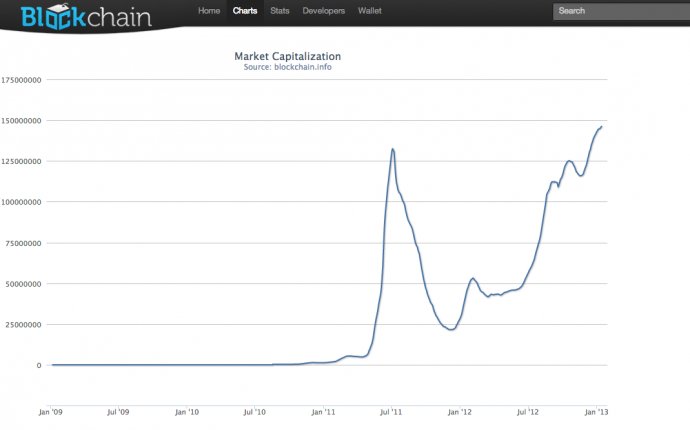 Another $1 bln will be added to the market cap of Bitcoin in one day - that is by tomorrow December 24 if the digital currency’s uptake continues at its current pace.

According to CoinMarketCap, the currency, as at the time of this publication, increased by 5.34 percent to push its market cap to $14.6 mln at a rate of $912 per Bitcoin, having recorded around $217 mln worth of transactions within the 24-hour period.

This could mean another record for Bitcoin by tomorrow December 23 as its market cap would have crossed the $15 bln mark.

There must be an explanation for why the price of Bitcoin has risen by more than $100 in three days, that is over 14 percent, to break the $900 mark for the first time since December 2013.

The Chinese yuan devaluation and the Trump factor have been projected to create more impact in months to come. There also seems to be an increase in the adoption of Bitcoin among professional as well as private investors with more people showing a greater reliance on the digital currency as a viable alternative to protect against world’s largest economies that are growing increasingly unstable.

However, below are some other theories that are making the rounds:

Added to this is the recent approval by the Italian cabinet of a $21 bln state bailout for the country's third-largest bank, Monte dei Paschi di Siena to support the embattled banking sector since Monte dei Paschi failed to raise €5bn from private investors. On Wednesday, Monte dei Paschi revealed that it could run out of funds by next April, using up nearly €11bn

In another vein, the European Commission has proposed tightening controls on cash and precious metals transfers from outside the European Union on Wednesday, in a bid to shut down one route for funding of militant attacks on the continent. Under the deal, which still needs European Parliament approval, holders of prepaid cards would have to show some form of identity when they make payments of 150 euros or more.

The issue of the block reward halving seems to be coming back again. The effect of the recent halving is linked to the reduced rate of new supply by half. Its theory argues that the rate of inflation has been cut in half or the number of Bitcoin users has increased dramatically which makes the total supply that still remains the same to be less than enough to go around. This has been worsened by the threat of a contentious hard fork. There are suggestions that miners could be holding coins to create scarcity which in turn increases the price.

From buying without selling - that is hodling - to speculations on what to expect in the coming days and how what they have would eventually turn out to be, many individuals want to have a happy ending with their few units of the currency.

However, their holding on to these unspent coins in a way contributes to increasing the value it has in the wider market. The war on cash that is gradually taking shape as well as the falling value of many global currencies may have boosted confidence in cryptocurrencies as a reliable store of value. This could have contributed to what made interest in the digital currency to surge in a way.

How could Bitcoin be soaring in price while precious metals are dropping in value despite their all being considered to be safe haven assets? Though there have been reports of gold price manipulation by governments and central banks which are not possible with Bitcoin, the most acceptable explanation so far is that the adoption of Bitcoin has really improved so much within the past few months. Whether you now believe that or not is going to be based on personal perspective. Hence, you need to apply caution where you deem it fit.