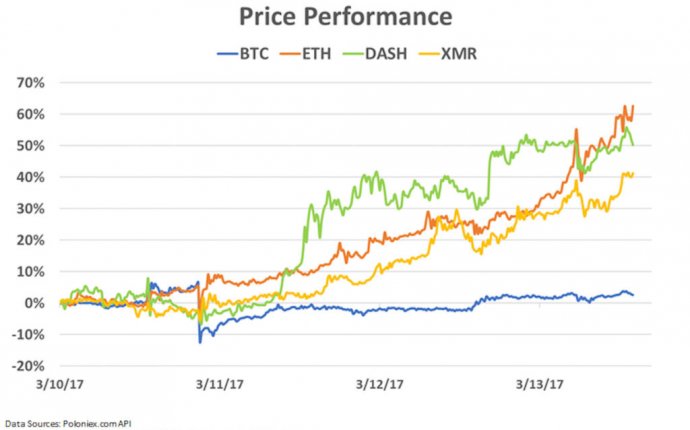 As it overtakes Ripple, Dash is now behind only Bitcoin and Ethereum in terms of market value.

Dash marked an important milestone today as the privacy focused cryptocurrency made it to the top three blockchain asset spot. The market value of all the Dash tokens in circulation is now over $263 million, well over Ripple’s $204 million market cap and below only Ethereum and Bitcoin.

Already at all time highs when we last reported on the rally just two days ago, Dash has jumped about 30% since. One possible reason for the new jump in price, from $28 to $37, is a recent show of confidence in Dash by cryptocurrency advocate and investor Roger Ver, aka “Bitcoin Jesus”. He reportedly bought Dash in protest of the censorship of major Bitcoin community forums.

The Dash team has also announced a partnership with Wall of Coins that allows user to buy and sell cryptocurrency at banks such as Chase, Bank of America and Wells Fargo, as well as financial service companies like MoneyGram and Western Union.

Wall of Coins is a web based platform that allows users to buy Bitcoin and Dash with cash, or sell Bitcoin and Dash for cash, in a peer-to-peer manner. Through the website, customers are instructed to deposit cash at a local financial institution, and in a matter of minutes, receive Dash or Bitcoin directly to a software wallet of their choice.

Dash Director of Finance Ryan Taylor said: “One of the biggest barriers for consumers getting into a new cryptocurrency like Dash is obtaining their first coins. With most services, there is a lot of friction involved. You need to sign up for an account, verify your identity, wait for account approvals, and transfer funds from a bank account. The entire process can take days. Wall of Coins makes this process much simpler, and allows users to purchase Dash immediately at tens of thousands of physical locations in twelve countries. And since Wall of Coins is supporting our InstantSend feature, transactions leveraging the Wall of Coins system will be blazingly fast. It also gives the community another way to sell their Dash, often at a premium to the rates available on traditional exchanges.”

Robert Genito, Project Director at Wall of Coins, commented: “We have become the first service to let people get Dash directly with paper money, and by far the fastest marketplace for it. It took us a little while, but we realized why Dash was so important in this industry; it truly is a great gift to the world. Although Bitcoin purists had immediately disregarded it and gave me pressure for talking positively about the protocol, Dash is really focused on giving people and business what they truly want: instantly-settled payments, privacy, optional transparency, and the ability to fix problems quickly.”