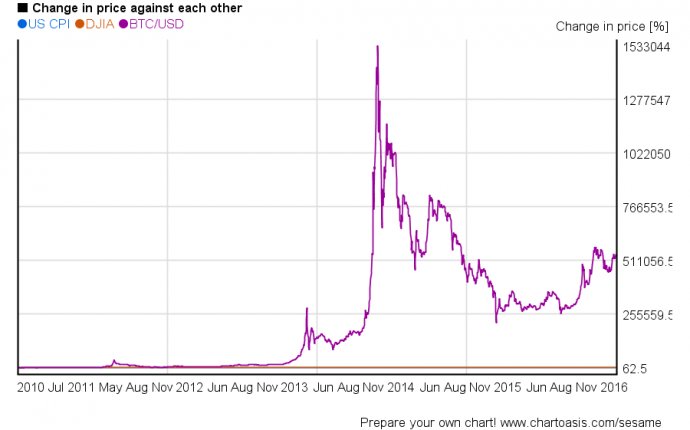 Despite being the digital solution to a multitude of economic problems of the contemporary world, Bitcoin as a currency has some serious issues which stand in the way of its wide acceptance. The main reason is that Bitcoin is very volatile as a currency. The price at any given moment can be significantly different from what it was just a moment before. Fortunately, there are tools for checking out the current Bitcoin exchange rate and the charts to provide an outlook on Bitcoin exchange rate history.

For Bitcoin to function as currency, there has to be some value behind it. While the gold’s value is determined by its use in industry, Bitcoin is nothing more than bits on one’s computer. However, these bits have been highly valued for some time already. The current price of Bitcoin is the proof.

Generally, there are two main factors that affect the value of Bitcoin at a given moment. They are media events and (supply and) demand.

The role of demand

The supply part of the supply-demand duo has been put in brackets, as the absolute Bitcoin’s supply is predetermined and limited. Only 21 million coins will be issued in the crypto’s lifetime. According to the creator Satoshi Nakamoto’s plan, In 2140, all of them will be mined. Such a limitation is a nice stimulus for enthusiasts to buy a Bitcoin and become ‘one in 21 million’. The “rare equals valuable” rule applies here quite well.

The role of media coverage

Then, media coverage helps Bitcoin a lot. While the cryptocurrency community is not that numerous yet, Bitcoin-related news help raise awareness about the digital currency and its benefits. First of all, the demand gets stronger as more people are willing to try the new technology. They see that this ‘magic Internet money’ can be used as the payment for products and services that they know of (take AirBaltic, Overstock, or Microsoft), and they become convinced in its real value. Secondly, they see the approval of cryptocurrencies from the big market players and big media names. If you look at any Bitcoin exchange rate chart and define the main turning points, you will see that more coverage means more awareness and higher demand, which mean greater value and higher price.

In simple words, Bitcoin’s value refers to what it’s worth as believed by people who use it. Being valuable, however, means little in the context of today’s global economy. People need a number to operate. Thus, the price is created. Partially, this price is related to Bitcoin being an asset or commodity – meaning that one can buy it for a certain amount of something.

Bitcoin’s price seems like something absolutely unpredictable. It can rise or drop dozens of dollars in some 10 minutes (average time it takes for a block to be created). For example, the day’s difference on March 4th was , which is not that much. At the moment of writing, Bitcoin is priced at approximately $280. As the exchange rate grows, it gets valued more. And this current price follows a relatively long period of stability at $230 and around it. You can always stay updated on the current Bitcoin price by checking out CEX.IO Bitcoin calculator. It will also show you the amount of crypto you will get for a particular sum in fiat currency. If you want to follow the price variations of this extremely volatile entity, Bitcoin price charts come handy.

Trading pages on many exchanges have charts that show the Bitcoin price changing over a certain period of time. If you are lost and confused when looking at a price chart on CEX.IO, you might find this recent article quite useful.

One of the great ways to stay updated on all Bitcoin price changes is via installing a mobile app. For example, ZeroBlock from Blockchain.info provides a customisable Bitcoin exchange rate chart where you can watch the price changes over time. The periods to choose from are 24 hours, a week, a month, and a year. It also shows the most current price, which allows you being aware of the latest deal.

When looking on such Bitcoin price charts, you might want to compare current Bitcoin exchange rate with the one that was at some point in the past.

The history of Bitcoin’s price is an impressive sight to look at. If you remember the famous Bitcoin price bubble, which burst after the currency reached over $1, 000, then you surely know what we mean. If you don’t, then you might find the old charts and look at them. Blockchain.info provides such an opportunity to view the Bitcoin exchange rate history from the price not exceeding $1 till the spring of 2011.

While there is no way to know what the Bitcoin’s exchange rate will be for sure, you might make guesses based on the abovementioned charts and also by following the cryptocurrency-related news.
Also, here is some information on how to apply your chart-reading skills to price prediction. You might consider it as your introduction to technical analysis. Apart from the general usefulness of such knowledge, making prognoses will help you as a Bitcoin trader.

Bitcoin is a relatively new phenomenon with its wonders and challenges. While it may be regarded as a great payment system and revolutionary technology, its volatile price can drive just anybody crazy. On the other hand, such a volatility can be also explained by the simple supply-and-demand duo, as well as the general opinion of Bitcoin and attention to it.

While the price difference on the same day may reach dozens of US dollars, there are tools to keep track of all those changes. They (for example, charts) can also help predict the direction in which the Bitcoin exchange rate will move in the future.

RT @StarbaseCo: We went to some European countris, and tried to buy bitcoin at the station, but gave up. The exchange rate was terrible...