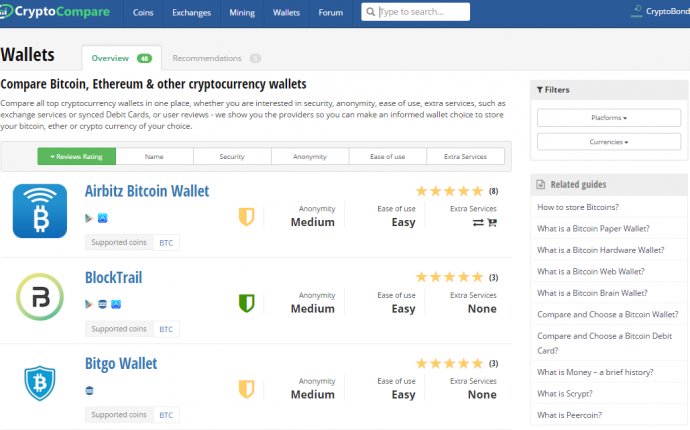 Bitcoin is significantly different from any financial tool we have ever used. For this reason, it is crucial to take the time to educate yourself about the special features and the dynamics of cryptographic environment. In order to start Bitcoin trading or mining, it is important to choose an appropriate wallet that would securely store your funds and fulfill all your requirements such as easiness of operation, anonymity, etc.

The question of “where to store bitcoins” is one of the most substantial decisions for a Bitcoin user. That’s why we have done this article with a thorough Bitcoin wallet review for all the Bitcoin wallets.

What are the main types of wallets?

Bitcoiners, who have already installed the original Bitcoin client (Bitcoin-Qt), already have access to a wallet that relays transaction on the network. This software can also be used for creating a Bitcoin address for spending and receiving digital currency. Certain desktop wallets are known for the advanced levels of security — Armory is a good example. Hive (OS X based), MultiBit (Windows, OS X, and Linux), DarkWallet (anonymity-focused) are among the most popular desktop wallets.

Mobile wallets operate as apps on mobile phones and are considered to be more convenient than desktop wallets due to their advanced mobility. Owners of these wallets can pay for products with their smartphones. Some mobile wallets allow users to benefit from the near-field communication (NFC) feature that processes payment through tapping the phone against a reader without the necessity of entering any information. Most popular mobile wallets are Mycelium, Xapo, and Blockchain.