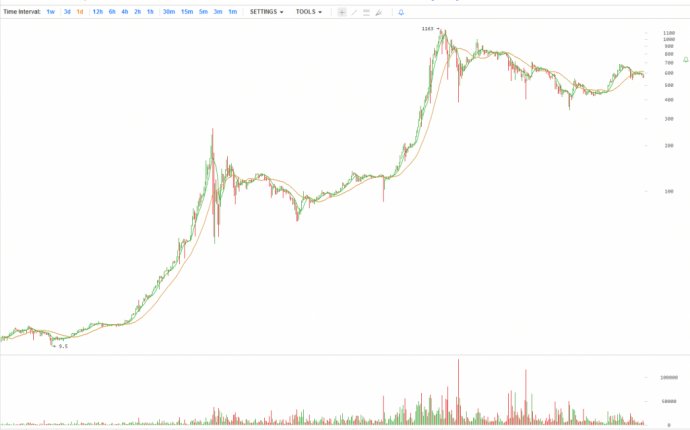 2016 has been an excellent year for Bitcoin in many respects. Scalability innovations like Segregated Witness have been introduced to the Bitcoin community, many successful Blockchain and Lightning Network tests have taken place and many new markets have turned to Bitcoin as a viable currency option.

The price of Bitcoin has been a major positive in 2016 as well, with its value up by well over 75 percent. Now, Dec. 1, 2016, marks the highest Bitcoin price measured in over two and a half years.

According to BitcoinAverage, the price of Bitcoin passed the $760 mark on Thursday night, marking a new high for 2016 and eclipsing the $758 value from the last day of Spring on June 19, 2016.

The average Bitcoin price has not been at this level since Feb. 6, 2014, when the Bitcoin community began to discover that Mt. Gox was going to completely collapse.

The value of Bitcoin didn’t stop falling throughout 2014 and didn’t bottom out until midway through January of 2015 when the price dropped below $200.

The reasons for this recent surge in price is fairly straight-forward. Many countries national currency values are in a state of despair due to recent events, including Venezuela, Great Britain, Italy and Brazil. Most notably and maybe most directly influencing this increase is the economic problems in India.

The first day of the month is a national payday for many people and businesses, and the level of paper currency is nowhere near what is needed to properly fund this economy. Bitcoin prices in India have exploded, last week reaching close to $1000 as the area tries to exchange value through companies like Zebpay and Unocoin.

Obviously, this premium pricing for Bitcoin, along with more transactions needed in the country, is having an impact on the average global market price.

Government sources in India hint that the currency issues in India may persist and people should get comfortable with making digital payments. This seems to be exactly what people in India are doing with the digital currency.