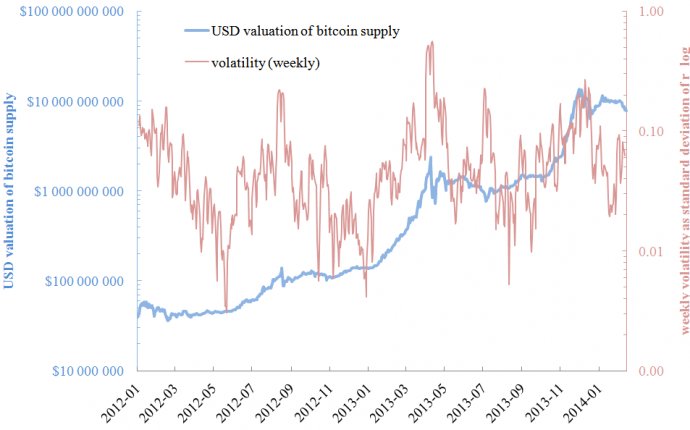 Bitcoin has value because people think it has value.

Your first question might be to ask whether Bitcoin has any value whatsoever. After all, many bitcoin skeptics have knocked the virtual currency for its lack of "intrinsic value", including world-class investors like Berkshire Hathaway Inc.'s (NYSE:BRK.B) Warren Buffett (who called Bitcoin a "mirage") and J.P. Morgan Chase & Co.'s (NYSE:JPM) Jamie Dimon, and venerated economists like former Federal Reserve Chairman Alan Greenspan and Nobel laureate Paul Krugman ("Bitcoin is evil"). Despite this army of skeptics and a myriad of bad news for the industry so far in 2014, Bitcoin still continues to trade for multiples more than it did one year ago. The Winklevoss twins clearly disagree. See Investopedia's interview with Tyler Winklevoss.)

How can this be?

Quite simply, Bitcoins have value because a small, but growing group of people believe that the underlying Bitcoin technology has value. In the future, the Bitcoin technology may be used for a wide array of financial services applications from payments, to contracts, to distributed exchanges. Since Bitcoins are the scarce currency units which are required to power these applications, they are valuable. Unlike fiat currencies whose money supplies may be inflated by central banks, there are a finite number of Bitcoins that will ever be released into circulation, making the currency a superior store of value versus other international reserves. Although Bitcoin is not legal tender backed by a particular government, the currency's value is supported by the individuals and merchants who voluntarily accept Bitcoin for their goods and services.

If we can agree that Bitcoins have a positive expected value (because at least some people believe the underlying technology has the potential to be revolutionary), we can start to make our own estimates about its current fair value.

It is important to note that the total market value of a currency, its "monetary base", is driven by two things, transactional demand and reservation demand. We can think of Bitcoin's average daily "float" as the analog of our economy's M1 money supply - the currency needed to satisfy transactional demand for goods and services. Similarly, we can think of the Bitcoins which are "hoarded" by speculative investors as the currency needed to satisfy reservation demand for secure long-term savings. Combined, Bitcoin's float and reserves comprise its total monetary base, which is similar to our economy's M2 money supply (M1+money in savings deposits, money markets, etc).

So the monetary base relies on both consumers and investors who believe that the Bitcoin technology will power a certain volume of economic exchange today and in the future. Speculative investors in particular have shown an extraordinary willingness to buy BTC, leading to a much larger monetary base than would otherwise be expected for a currency with bitcoin's transactional volume.

And that's ok! As long as the transactional demand for Bitcoin continues to grow exponentially in the coming years, the balance between Bitcoin's float and its total monetary base will likely reflect that of other global currencies. (To learn how Bitcoin enters into circulation, read, "What is Bitcoin Mining?")

Bitcoin's potential monetary base is one key input we need for our valuation.

Since there is no real difference between a BTC held for commerce and a BTC held for investment, it should be clear that we really only care about Bitcoin's total monetary base when it comes to valuation.

Theoretically, the fair-market value of one BTC should simply be the dividend of its predicted future monetary base and BTC in circulation, discounted by a "hurdle rate" an investor would require in order to invest in the speculative currency.