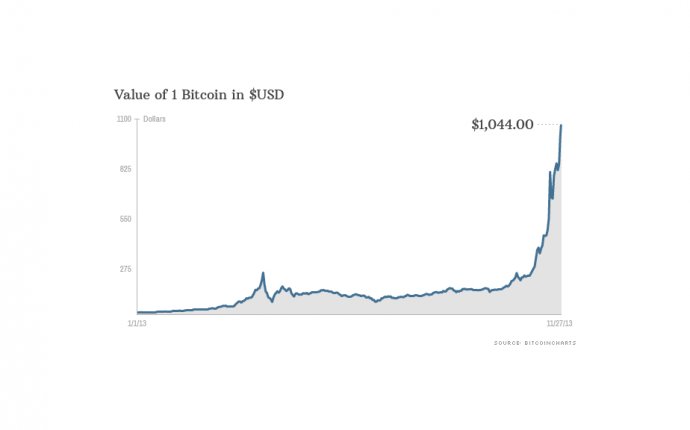 Digital currency bitcoin kicked off the new year by jumping above $1, 000 for the first time in three years late on Sunday, having outperformed all central-bank-issued currencies with a 125 percent climb in 2016.

Bitcoin—a web-based cryptocurrency that has no central authority, relying instead on thousands of computers across the world that validate transactions and add new bitcoins to the system—jumped 2.5 percent to $1, 022 on the Europe-based Bitstamp exchange, its highest since December 2013.

Though the digital currency has historically been highly volatile—a tenfold increase in its value in two months in late 2013 took it to above $1, 100, before a hack on the Tokyo-based Mt. Gox exchange saw it plunge to under $400 in the following weeks—it has in the past two years been more stable.

Its biggest daily moves in 2016 were around 10 percent, still very volatile compared with fiat currencies, but markedly lower than the trading of 2013, which saw daily price swings of as much as 40 percent.

Bitcoin may have been boosted in the past year by increased demand in China on the back of a 7 percent annual fall in the value of the yuan in 2016, the Chinese currency's weakest showing in over 20 years. Data shows most bitcoin trading is done in China.

Bitcoin is used to move money across the globe quickly and anonymously and does not fall under the purview of any authority, making it attractive to those wanting to get around capital controls, such as China's.

It is also may appeal to those worried about a lack of supply of cash, such as in India, where Prime Minister Narendra Modi removed high-denomination bank notes from circulation in November.

"The growing war on cash, and capital controls, is making bitcoin look like a viable, if high risk, alternative, " said Paul Gordon, a board member of the UK Digital Currency Association and co-founder of Quantave, a firm seeking to make it easier for institutional investors to access digital currency exchanges.

Though bitcoin is still some way off the all-time high of $1, 163 that it reached on the Bitstamp exchange in late 2013, there are now more bitcoins in circulation—12.5 are added to the system every 10 minutes. Its total worth is at a record-high above $16 billion, putting its value at around the same as that of an average FTSE 100 company.