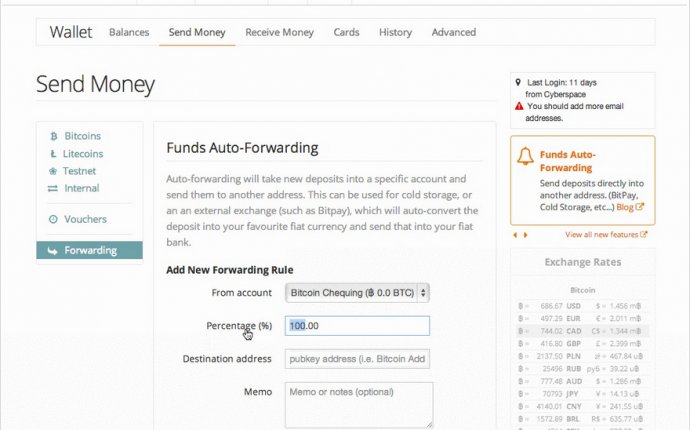 A few days ago Forbes ran a story about Olaf Carlson-Wee who has lived for three years using only bitcoin as currency. The 26 year-old works for bitcoin start-up Coinbase, so he obviously has a personal investment in proving the viability of bitcoin as a currency; even so it’s an impressive achievement. Carlson-Wee began his journey before bitcoin began to achieve its “trendy” image, and if he can do it then it’s certainly achievable for others, and likely to become more so with the introduction of products like the Shift debit card which was released by Coinbase.

Having said all of that it’s still going to be a while before bitcoin is completely mainstream. Although those people hunting for deals and bargains after the expense of the holiday season may be interested to know that more providers and retailers are starting to accept bitcoin as a method of payment. This is worth remembering when you are looking for bargain codes from cashback or voucher sites VoucherBin.co.uk for an instance. If you are looking to trade in bitcoin then you may be thinking about how to store your bitcoin safely. We are going to take a look at some of your bitcoin wallet options.

What is a bitcoin wallet?

The thing is that you have to sign every bitcoin transaction with your private key, and which gets stored in your wallet. Basically opening a bitcoin wallet creates an address for you, with its own secure key so that you can then use the key to complete bitcoin transactions. Even though bitcoins are not actually stored in a wallet they are still protected by its use. There are several different bitcoin wallets on offer, but which one is right for you?

Which bitcoin wallet should you choose?

If you want high levels of security and you are happy with the physical limitation of having to use your desktop then this might be the right bitcoin wallet for you.

For anyone who wants access to bitcoin on the move, a mobile bitcoin wallet is a good option. Anyone who owns a bitcoin wallet can use their smartphone to pay for products. Some people can also benefit from the use of near-field communication technology which means they can simply tap their phone against a reader to pay. Some of the most popular mobile bitcoin wallets are:

It’s easy to see the access benefits of this type of bitcoin wallet.

If you don’t want to have a digital bitcoin wallet then you don’t have to; bitcoin paper wallets are often quite popular and are considered to be relatively secure. If you opt for a bitcoin paper wallet, which is also known as on offline bitcoin wallet, you have two QR codes. One of these codes is the bitcoin address and the other one is the associated encrypted private key. Of course, there is always the chance that you could lose the QR codes.

If you want to have a digital bitcoin wallet, but you don’t want to host your wallet on your own desktop, you have the option of choosing an Internet based bitcoin wallet. These wallets are mostly controlled by third party providers, which means someone else has involvement in controlling an individual’s bitcoin funds. Anyone who opts for one of these bitcoin wallets has their private key stored online. This means they can access funds anywhere they have Internet access. Some online bitcoin wallets can also be linked with mobile and desktop bitcoin wallets. The most popular of these wallets include:

The main problem with online bitcoin wallets is that they involve third party handling, part of what bitcoin is trying to do away with. That being said, it’s helpful to have access to funds wherever you can get an Internet connection. All of the bitcoin wallet options have their own merits and it’s vital that you consider all the options in detail before you decide on which one is best suited to your own personal requirements.