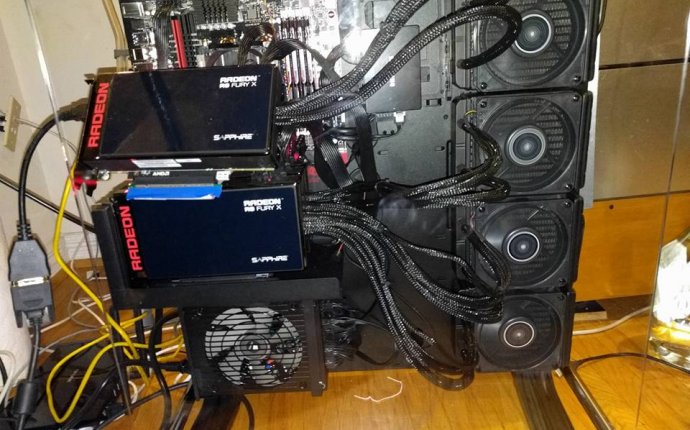 What started as a pastime any computer could dabble in has spurred the evolution of truly ridiculous powerhouse Bitcoin mining rigs. Meet the monster machines more powerful than everything you've ever owned, combined. By a factor of thousands.

It all started so simply. Just after Bitcoin's birth in 2009, and before its current surge of popularity, mining could be done by a run-of-the-mill CPU in just about any old computer. Back then—and still today—Bitcoins are mined by using computing power to solve a complex cryptographic equation. If your computer is lucky enough (or really, powerful enough) to get a right answer, you'll create coins. So given enough time, a CPU can actually get some mining done. And back in the early days, if you could get free power to run it from your dorm room, library, or office, and the exchange rate was high enough (a buck or two), you could stand to make some spare pocket change.

The all-out race for power isn't just some sort of freak side-effect of Bitcoin's surging popularity, though. It's actually built right into how Bitcoins come into existence. The cryptographic hashes miners need to solve to mine Bitcoins weren't easy to begin with, and they only get harder as miners throw more and more collective computing power at them. Bitcoin self-regulates its difficulty so that there's always just a trickle, one block of coins mined every ten minutes. No matter what. So it's not about the quantity of power you've got, but rather your proportion of the whole. You've got to keep up with the Joneses.

An average CPU can run four instructions per clock cycle, and offer a few thousand to a few million hashes per second. This was never exactly great, but a few years ago it was enough for a low-rent mining operation. But then miners discovered that they could use their GPU instead, which can 3, 200 instructions per cycle. The indispensable Bitcoin Wiki describes the shift like this:

One way to visualize it is a CPU works like a small group of very smart people who can quickly do any task given to them. A GPU is a large group of relatively dumb people who aren't individually very fast or smart, but who can be trained to do repetitive tasks, and collectively can be more productive just due to the sheer number of people.

And because mining is a repetitive task better suited to muscle than smarts, miners suddenly found themselves with an 800-fold increase in hashing power on their hands. Before long, the number of GPU mining rigs—combined with Bitcoin's regulatory difficulties—made massive amounts of power not just an advantage, but table stakes.

So where do you turn when everyone's competing with the same horsepower? Volume.

Two GPUs are better than one, and two dozen are better than two. But when miners started building up to such a macro scale, other concerns started to creep in. Finding space. Keeping systems cool. But the thing that really stood to cut into Bitcoin profits was—and still is—the cost of electricity. And this concern turned miners' affections to yet another, different tool of the trade called FPGAs.

While CPUs and GPUs had been co-opted and tweaked for mining, Field-Programmable Gate Arrays were the first devices with Bitcoin in mind down to the circuitry. FPGAs are chips have the ability to be re-designed on the spot, down to their very connections, so they can be good at just about anything with the proper guidance. This isn't consumer tech. Instead, it's generally used in supercomputers, data centers, MRI machines, PET scanners, and the like. But this sort of flexible savant-level specialization is also great for mining Bitcoins, once you can teach the chip how to do it.

An 8-core, pre-configured FPGA rig. It cost $2, 000 at . By then it was already very late to the game, offering 1/60th of the power of the Avalon ASIC which was released the following month for less.

The jump from GPU rigs to FPGAs didn't bring on a power-increase of multiple orders of magnitude, in the way the jump from CPU to GPU had. It did, however, provide a modest power bump, and actually reduced the amount of electricity necessary to get competitive hash-rates. But perhaps most importantly, FPGAs served as a final vaulting point into the next—and final—massive revolution in Bitcoin machinery: truly specialized hardware.