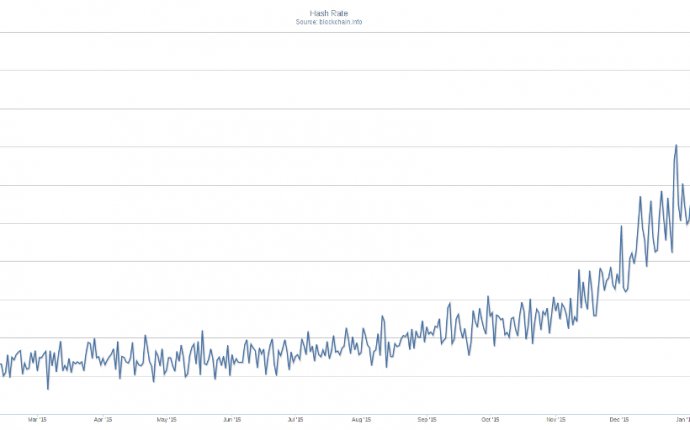 This chart, from Bitcoin wallet service and block explorer Blockchain.info, shows the amount of computational power worldwide dedicated to Bitcoin mining — the process of maintaining the public ledger of all Bitcoin transactions, and of being rewarded new Bitcoins for participating in this process. In just the last few months, this amount has exploded:

The chart shows the number of "gigahashes per second" being processed on the Bitcoin network. A hash is a cryptographic function that takes a large amount of data and generates from it a much smaller number. This is done in such a way that a very small change in the original piece of data will result in a very different hash number. Hashes are thus used in cryptography to show that a piece of data has not been tampered with — if the data has been altered, it is easy to see this, since the changed message will give a very different hash number than that of the original message.

Hashing is at the heart of the Bitcoin mining process. Miners assemble "blocks" consisting of Bitcoin transactions, a hash record of the prior transaction block in the "blockchain" — the public ledger of all Bitcoin transactions — and an extra randomly assigned number. The miner then repeatedly hashes the block, making a small change to the extra number with each repetition, until the hash number satisfies a rare criterion. This process will take, on average, an enormous number of repeated hash steps to get a hash number satisfying the criterion. Once that criterion is met, the block is added to the blockchain, and the miner is rewarded with her new Bitcoins.