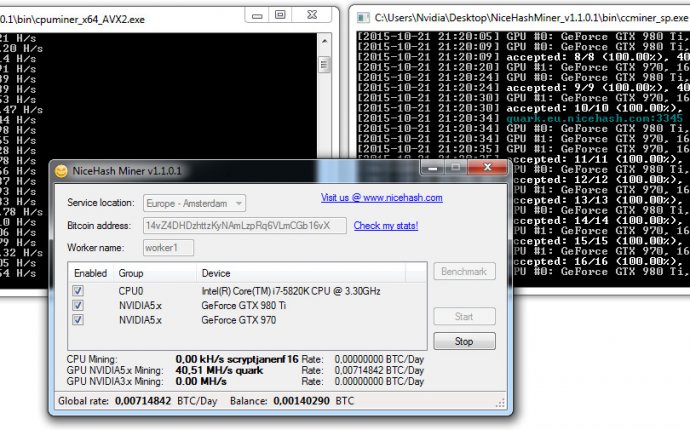 One of the most appealing aspects of Bitcoin is the ability to create it out of thin air via a process known as “mining”. While that’s a bit of an oversimplification (earning Bitcoin is more about contributing hardware than alchemy), mining remains an incentive for getting on board with Satoshi Nakamoto’s “magic internet money” – but is mining still a feasible activity for the average person almost a decade after Bitcoin first appeared?

Assuming that average person is somebody with an equally average computer, the answer is “no”, simply because the era when mining was profitable with off-the-shelf graphics cards is long gone. Mining with a PC is still possible but the viability of the undertaking hinges on the amount of gigahertz per second a device can produce: a new NVIDIA GeForce GTX 1080 can be overclocked to 4.4GHz while a specialized Antminer S9 comes in at 14THz.

The difference between gaming components and specialized ASIC miners in terms of power is therefore enormous. With electricity costs, mining on a high-end graphics processor produces a loss of about $629 a year; the Antminer S9 makes about $1, 000 in profit. However, there’s a problem – the S9 is very expensive, costing about $2100 (power supply sold separately), which means that in almost every case, solo mining isn’t really worth it.

The obvious solution is to pool resources. If money is no option, buying a thousand ASICs and a small power plant is a good business plan but regular 9-5ers have a better shot at earning Bitcoin by joining a mining “pool”, or group of like-minded people. A piece of software like GuiMiner comes pre-configured for the most popular mining pools and provides an easy-to-use interface for operating each miner.

Solo mining can be a luck-based endeavor that pays out over a course of years. With a mining pool, the rewards aren’t as valuable but they can be more consistent. A GuiMiner pool may also support in-app balance management, including the withdrawal of funds. Ultimately, forging ahead as a Bitcoin maverick or banding together to mine is a decision based on things like finances and access to hardware.

So, when did mining get so tough? Bitcoin has a creeping difficulty level, both in terms of how easy it is to “dig” out the cryptocurrency and how much there is to be found. Before going into why though, it’s important to understand what mining is; briefly, it’s the process by which Bitcoin transactions are added to a permanent ledger known as the blockchain. Miners donate computing power to solve the equations central to the operation of the Bitcoin network.

Mining is designed to get harder over time to compensate for the increasing capabilities of modern ASICs, with that growing complexity preventing super-powered hardware devouring all the available Bitcoins overnight. Similarly, to ensure a consistent supply of coins, an event called the Halvening cuts the possible rewards that can be earned for completing a block every four years, the most recent one occurring in July 2016.

So, in summary, yes it is possible to make money from Bitcoin mining but, for most people, it’s either a community endeavor or a very expensive one.