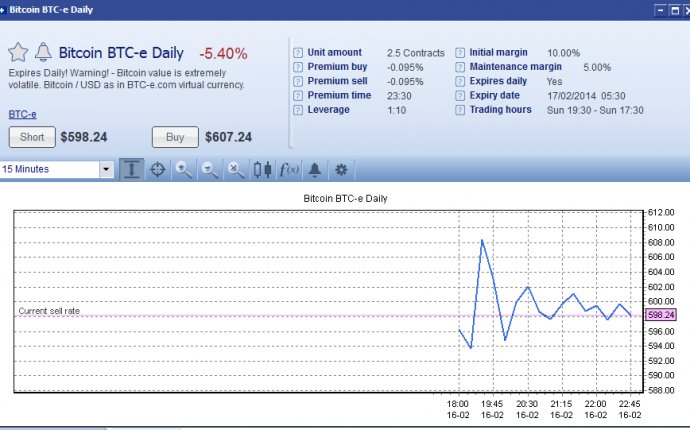 In the fourth part of a new series on FinanceFeeds, we take a look back at “This day in history” within the…

On April 29, 2013, which although exactly three years ago to this day, appears a veritable lifetime in the rapidly advancing and ever-evolving FX industry, Bitcoin made its foray into the retail brokerage sector.

The very first brokerage to offer Bitcoin as a tradable asset was Plus500, exactly three years ago today.

The virtual currency, which at the time was very much in its infancy and was not held in the high esteem by venture capital investors and R&D departments of global banks that it is today.

Plus500, which aims its service largely at spread betting and CFD traders, began to offer Bitcoin trading on a CFD basis, with the USD as its other pair on April 29, 2013.

At its launch, the BTCUSD contract had a minimum spread of $1.00 and leverage of 4:1, and was available for short trading.

Whilst Plus500 pioneered the currency trading aspect of Bitcoin in as a retail FX contract, IG Group was the first to incorporate Bitcoin into its product range as a tradable instrument, however IG Group offered it as a binary options product rather than a retail FX product.

By early 2013, Bitcoin exchanges such as the now-defunct Mt.Gox had come into existence, however the difference between the CFD product and the early exchanges was that this CFD product was designed specifically for traders to use it as an asset class in currency trading whereas exchanges provided a means of acquiring Bitcoin as a tender.

Unlike exchanges that offered Bitcoin, CFD prices are derived from actual prices and do not require the company offering the currency to facilitate an actual exchange in assets.

Whilst trading the currency was made available, Plus500 did not provide a facility to make withdrawals from trading accounts in Bitcoin, instead requiring withdrawals to be in sovereign currency.

Later that year, Plus500 amended the trading conditions of the USDBTC CFD, invoking a rule that traders must reopen new orders every day, whilst at the same time, leverage was removed altogether.

This was a risk management-driven change, as Bitcoin values jumped from $125 to $900 for one Bitcoin on Mt.Gox within one month, a result of which Plus500 had to reduce its vulnerability to large, multi-day pice moves.

Today, things are somewhat different and the underlying Blockchain technology that Bitcoin is built upon has become the darling of large banks and investors in the development of financial technology, mainly viewing it as a means of automating certain ledger and back office procedures that banks currently use, with development budgets running into the billions of dollars, and Bitcoin’s status having been legitimized as a result of the longevity created by such backing from institutions.

Ironically, it is this technology which is a byproduct of Satoshi Nakamoto’s original invention that has secured its future, and not the volatility, high values or somewhat anarchistic nature of a peer-to-peer digital currency that was intended to bypass exactly the same giant financial institutions and central banks that are now investing millions into its development.

#bitcoin, #cfd, #plus500, #this day in history
Source: financefeeds.com